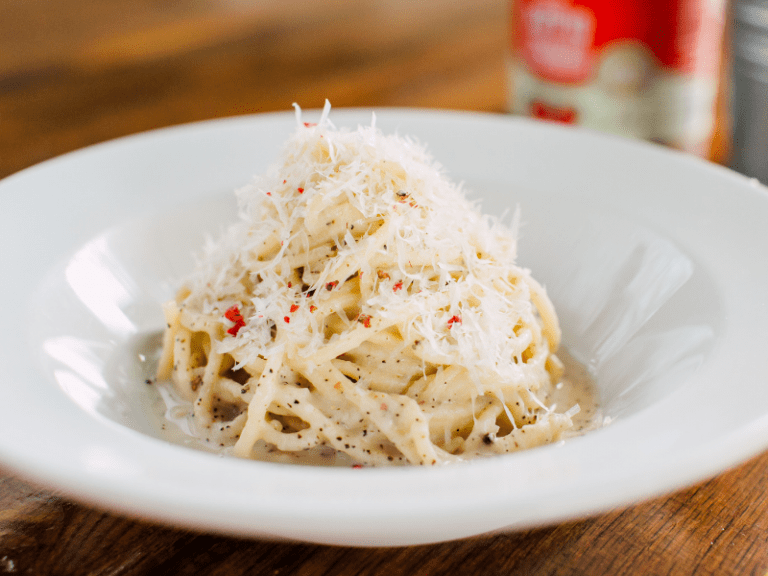 A little taste of Roman history and cuisine is now at Due':

This week we're introducing a brand new dish to the Due' menu that is as unique as it is simple and powerful. This is a dish for you "foodies" who love the culture and intention behind cuisine.

Cacio e Pepe is a Roman dish that dates back to the Roman Empire as one of the most 'ancient' dishes of Italy. It's name simply translates to "cheese and pepper" but that doesn't mean it's taste is just simple. Yes, it's main ingredients really are just cheese and pepper. But because it's ingredient list is fairly short, that means the taste and experience of the dish relies on the quality of those ingredients.  Here is where we've paid special attention to detail.  When crafting this dish, we searched for a few months in search of the perfect cheese combination. We've decided on the flavorful combination of Pecorino Romano DOP aged for sixteen months and a Parmigiano Reggiano aged twenty-four months to create a rich, velvety and creamy sauce that is a wonderful based for our selection of peppers.

For our peppers, we were specific and intentional as well. The sauce is topped with freshly toasted and cracked black Tellicherry which is known for its woodsy and zesty notes and Sarawak pepper which brings in musky, and slightly liquorice aromas.

The resulting flavor of this combination is anything but simple. When you try it, you'll understand why this has been an Italian favorite for literally thousands of years.

Cacio e Pepe is now on the menu for you to enjoy!

We bring authentic Italian cuisine with no compromises. Fresh, local and affordable!

LOCATIONS
ALLERGEN FACTSTERM OF USE